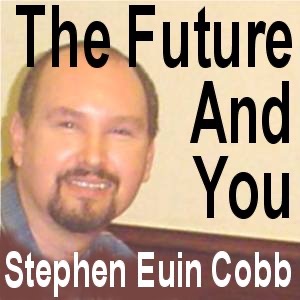 The Future And You

The Future And You

This award-winning series explores The Future of Everything. What can we expect of next week, next year, next century? What will we eat, drive, wear, live in, vote for, want to buy, and want to avoid? What mistakes of the past will we make again, and which ones have we learned from? From the next tick of the clock to the ultimate end of the universe, every subject is fair game. Composed of interviews and essays, it's hosted by the author and futurist Stephen Euin Cobb. Guests include: famous authors and the occasional celebrity, but mostly futurists, innovators, technologists, analysts, entrepreneurs, and those pushing the limits of technology, as well as those struggling to understand the trends growing strong around us now--since it is those trends which will create the future in which we will all live. This program is not about magic, or prophecy, or psychic divination. Instead, we attempt to use verifiable facts as our foundation, and from them extrapolate forward. All such extrapolations--regardless of the credentials of those putting them forth--must be considered pure opinion. Time alone, will allow these extrapolations to be verified or nullified. Topics and themes explored include: nanotechnology and biotechnology; organlegging and organ transplants, molecular manufacturing and computers wired directly into the human brain; extropianism, transhumanism and the technology of individual immortality; terrorism, globalization, global warming and nuclear proliferation; cryonics and cryogenics; genetic engineering and the human genome project; embryos, cloning and stem cell research; astronomy and other space explorations (NASA, Hubble, exoplanets, SETI, ESA, CCCP, lasers and space probes); the singularity, robots, robotics and artificial intelligence (AI); remote sensing and waldoes; legal and illegal uses of the Internet (hackers and hacking, viruses and Trojan horses); solar cells, peak oil and alternative energy; aging and medical longevity; FTL (faster than light travel, as in Star Trek and Star Wars) and worm holes (as in StarGate SG-1); progress in health, education and neuroscience, as well as evolution, agriculture and inventions; and how what was once science fiction and fantasy is now biology, chemistry and physics. Everything from futurism to futurology. To learn more, check the show's website at: www.TheFutureAndYou.com

Just a quick prayer for the day.

<a data-toggle="popover" data-placement="bottom" data-trigger="hover" data-content="Marina Sergeyeva (medical student) James Maxey (author and "big science geek") and Stephen Euin Cobb (your host) are our featured guests. Topic: Technical, Legal and Moral Aspects of Cryonics Hosted by Stephen Euin Cobb, this is the September 28, 2011 episode of The Future And You. [Running time: 35 minutes]. This is the first half of a discussion panel recorded before a live audience on June 4, 2011 in Charlotte North Carolina at the SF&F; convention ConCarolinas. (The second half will be in next week's episode.) Marina Sergeyeva has degrees in biochemistry and mathematics, and will soon begin medical school. Formerly of the Ukraine, she now lives in the US. James Maxey is the author of the superhero novel Nobody Gets the Girl as well as the Dragon Age fantasy series which includes the novels Bitterwood, Dragonforge, and Dragonseed. Set a thousand years in the future, after the fall of our modern civilization, in a world dominated by the intelligent dragons we created through genetic engineering. Humans are reduced to slaves, and the remnants of long forgotten nanotechnology make the world a wondrous place of magic. Stephen Euin Cobb is the author of Bones Burnt Black and Skinbrain. News Items: [1] New eye implant improves vision by making the cornea mimic a pinhole camera; [2] Tased from above… The new ShadowHawk robot helicopter starts patrolling civilians; [3] Noticeably deeper sleep produced by TA-65." data-html