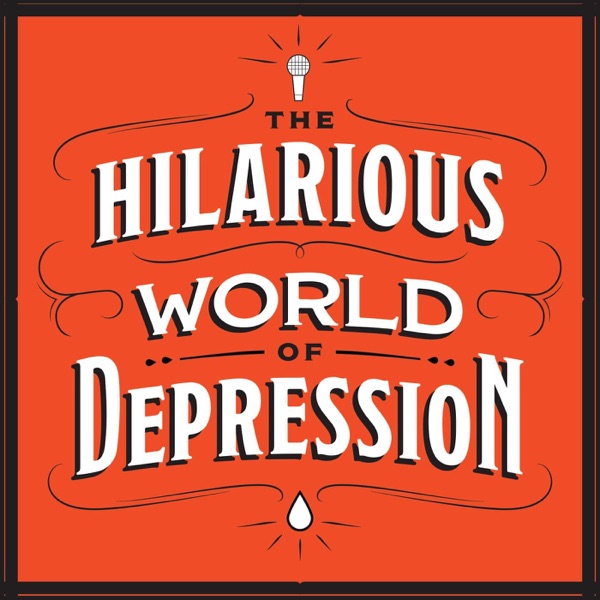 The Hilarious World of Depression

The Hilarious World of Depression

A show about clinical depression...with laughs? Well, yeah. Depression is an incredibly common and isolating disease experienced by millions, yet often stigmatized by society. The Hilarious World of Depression is a series of frank, moving, and, yes, funny conversations with top comedians who have dealt with this disease, hosted by veteran humorist and public radio host John Moe. Join guests such as Maria Bamford, Paul F. Tompkins, Andy Richter, and Jen Kirkman to learn how they’ve dealt with depression and managed to laugh along the way. If you have not met the disease personally, it’s almost certain that someone you know has, whether it’s a friend, family member, colleague, or neighbor. Depression is a vicious cycle of solitude and stigma that leaves people miserable and sometimes dead. Frankly, we’re not going to put up with that anymore. The Hilarious World of Depression is not medical treatment and should not be seen as a substitute for therapy or medication. But it is a chance to gain some insight, have a few laughs, and realize that people with depression are not alone and that together, we can all feel a bit better. American Public Media and HealthPartners’ Make It Okay campaign are committed to breaking the stigma around mental health.

The One Take Podcast

Join me weekly discussing the ins and outs of life; learning as we go!

Introducing Depresh Mode with John Moe: Joel Kim Booster Is In A Pit

Movies That Get Depression Right

Mike Birbiglia Faces His Darkest Fears and Puts Them On Stage

Free Chapters of The Hilarious World of Depression: The Book: The Audiobook

Emmy Blotnick Once Ate a Whole Head of Cabbage. Alone. In Silence.

Call A Friend, Find Out How They’re Doing

Lori Gottlieb Has Seen All Possible Sides of Therapy

Jameela Jamil Has an Ambitious Goal: To Feel Things

A Message From Inside John's Closet. I Mean Office.

Theo Fleury: Trauma, stardom, and a downward spiral on the latest Tremendous Upside

Miz Cracker Looks in the Mirror

Anil Dash Loves Social Media and Wants It To Change

Ryan Bingham Finds a Home and Settles Down

Heather B. Armstrong Nearly Dies Ten Times and It Works Out Great

Whitney Cummings Puts It Together and Stops Falling Apart

Jenny Lawson and Books That Get Depression Right

The Perils and Rewards of Travel

Naomi Ekperigin Brings In Her Baggage, Unpacks It

Guy Branum Goes to Minnesota, Gets Good Internet, Finds Self

The Hilarious NIGHT of Depression

Words: Am We Uses Them Good At Mental Health?

Scott Thompson Keeps Getting Back Up Again

Chris Gethard Does Not Avoid the Collision

How to Get Help

Highlights From A Hilarious Night of Depression

Hannah Hart Gets Drunk, Tries To Make Grilled Cheese, Gets Famous, Tries To Enjoy It

Rachel Bloom Finds Her Voice, Then Uses It To Sing About Stealing Pets and Moving to West Covina, California

Reggie Osse Puts It Together

Mike Brown Trains as an Engineer to Prepare for Comedy

Janelle James Discovers She’s a Comedian and Not a Gardener

Ana Marie Cox Is Not Really Edited Much At All

Gary Gulman Is a Brilliant Comedian and an Ineffective Offensive Lineman

Wil Wheaton Is Really Hoping It’s All Worth It

Episode #PLACEBO: Imagine Depression as a Person and Describe Them

Episode #PLACEBO: How to Get Help

Episode #PLACEBO: Hitting the Nail on the Head

Episode #PLACEBO: John Darnielle of The Mountain Goats on where all that coping music comes from

Episode #PLACEBO: The Things We Tell Ourselves That Help

Episode #PLACEBO: Bonus Episode of Terrible, Thanks for Asking to Celebrate #trypod

Episode #3: Sam Grittner Finds a Funny Thing Happened On the Way to Suicide