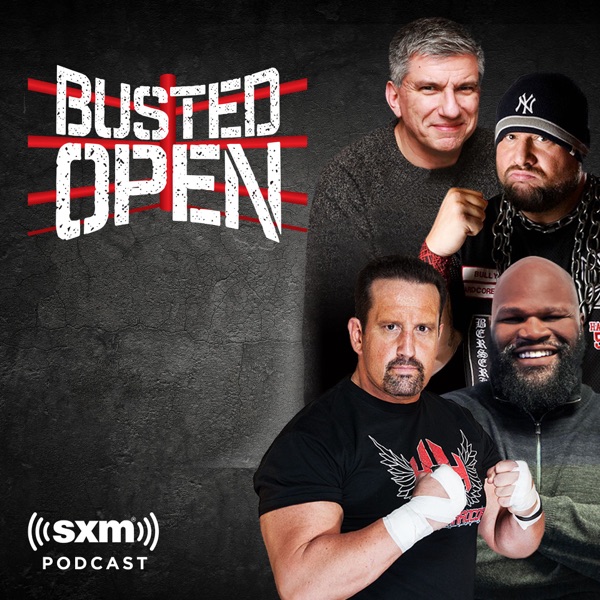 Join Dave LaGreca and his rotating co-host chair that features two WWE Hall of Famers in Bully Ray and Mark Henry and ECW Original Tommy Dreamer for the best pro wrestling talk on radio. From the WWE to Ring of Honor to New Japan Pro Wrestling and the independent scene, Busted Open covers pro-wrestling like no one else in the world! Listen to the full show Monday through Saturday from 9 a.m. to 12 p.m. Eastern on SiriusXM Fight Nation channel 156 or On Demand anytime on the SiriusXM app.

'Dark Side of the Ring' Reaction / 'Tony Time'

"The Demon" returns with a message for Roman

This Mic Isn't Hot ... It's Scorching

Tony Khan On 'All Out' & What's Next For AEW

AEW All Out Recap and Reactions

Inside AEW All Out: 'The Backstage Sessions'

Busted Open's 'Inside AEW All Out'

Wait, Was That A Bryan Danielson Tease ... ?

Mickie James Is Ready To EmPowerrr

Just Who Is The WWE For Now?

Does Cena Get #17 At SummerSlam?

That's The Old Stinger That Many Of Us Remember

Who Is RAW Written For?

Will John Cena Win At SummerSlam?

'The Masters Class': Two Days A Week (On TV)

The Long March to Rampage

Episode VI: Return of the RKBro

The End Of NXT As We Know It

Why is the WWE Releasing more Wrestlers?

'The Masters Class': What Is NXT?

Jericho vs Gage at AEW's Fight for the Fallen

The Stars of Starz's 'Heels'

Is WWE a Wrestling Company?

'The Masters Class': RETURN of the Crowds

Money in the Bank & Slammiversary

Fans are FINALLY back at WWE! / Sami Callihan talks IMPACT

Bringing Eyes To Ring of Honor

One of the best from WWE is Injured

Malakai Black is ALL ELITE

Tommy Dreamer with an Update on Terry Funk

Kenny Omega Went Over, But Jungle Boy GOT Over

The Week in Wrestling

'The Masters Class': Hell in a Cell

'The Masters Class': My First Time

NWA When Our Shadows Fall Recap

SPECIAL: Inside AEW Double or Nothing

AEW Double or Nothing Preview / Best of Week in Wrestling

The History of The Samoan Dynasty

MORE on The 'End' of Kayfabe / Wrestling & the Fans

'The Masters Class': The End of Kayfabe

The Week in Wrestling / Kofi Kingston

The Week in Wrestling / Titus O'Neil

RAW's Positives ... & one Hell of a RANT about the Negatives

'The Masters Class': The Art of the Promo

AEW Recap / Wrestlemania By The Numbers

Chris Jericho / The End of the 'Wed Night War'

Beth Phoenix / did LaGreca just walk off the show??

MJF's on this episode & Dave LaGreca is NOT happy

Billy Corgan & the NWA / the Week in Wrestling

Britt Baker vs Thunder Rosa ... The Best Match of AEW Dynamite So Far?

Is 'Austin 3:16' the Greatest Wrestling Promo EVER? / Thunder Rosa

AEW's Rebel / Are PPVs Too Long?

AEW vs NXT / Dark Side of the Ring: Confidential

NXT Rumors? / the return of the NWA / Fat & The Furious

The Week in Wrestling

Everything AEW/NXT From the Week

Royal Rumble: 5 Things to Look For

AEW & NXT Recaps / the Busted Open Nation is a FAMILY

The Week in Wrestling / Tasha Steelz of IMPACT

WWE & COVID / Why the hate for Charlotte Flair?

History of Starrcade Part I / Greg "The Hammer" Valentine

WWE Talent Sent Back To Performance Center / Big E as a Singles Champ?

The Young Bucks / The Acclaimed