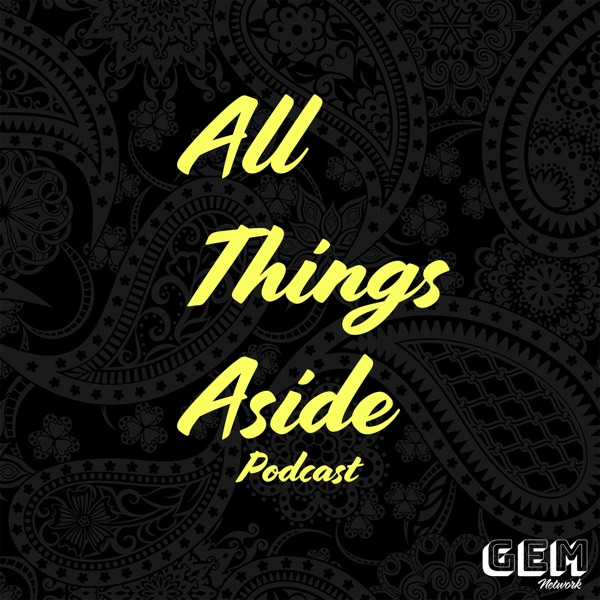 All Things Aside Podcast

Well..... we tired. We have a disclaimer before the show telling you what its going to be all about, but we smoked some fire ass weed, and got immensly side tracked but, dont think this episode aint a good one, shoot.. we might get high snd go off the plan more often, just kidding........maybe not.

On today's episode we discuss D'Angelo, Brown Sugar, The Soulquarians, and Voodoo (2:23) Untitled, Hiatus, Mental Illness & Summer Walker? (6:57) Something happened here when our conversation jumped from talking about Torey Lanez to Dave East's major label flop (9:20) Stream rates artist vs the label (10:15) Ursula's rant on Aaliyah's uncle not releasing her music on streaming platforms after it was announced (12:20) Jahiem need to put his healthcare first (17:59) Ursula's rant on Whitney Houston throwing a fur coat in the ocean in "Heartbreak Hotel" (22:20) Maxwell's "Urban Hang Suite" and how we appreaciate it now, but back then...boi!!!!! (23:33) Shake dat Ass (25:01) Frankie tells us a story (31:32) The dynamic of Til the Cops Come Knocking and Sh*t, Damn, Motherfucker (39:00) Speaking on Neo Soul.... (45:00) and more

Executive Produced by Mr.B and Urs
Engineered and Mixed by Frank Metalz
Recorded at The Dojo in Jersey City, NJ
Theme Song "4thamind" by Streetiebaby