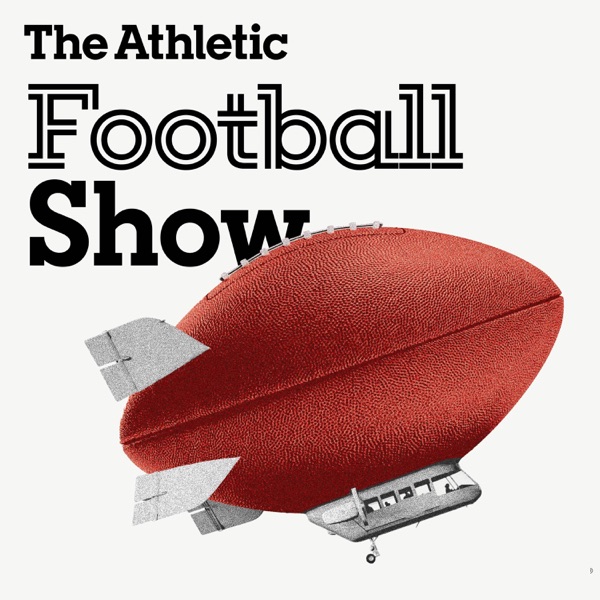 The Athletic Football Show: A show about the NFL

The Athletic Football Show: A show about the NFL

The Athletic’s flagship football podcast covers the NFL like only The Athletic can. Robert Mays is joined by a team of world class NFL writers and analysts including Lindsay Jones, Sheil Kapadia, Nate Tice, Diante Lee and more. They’ll break down the biggest stories throughout the world of football. Whether it’s happening on the field, or behind-the-scenes, you’ll get an in-depth look at the NFL season and NFL Draft on The Athletic Football Show.

Welcome to the Logic Companion Podcast! This endeavour is brought to you by Los Compadres Production, and the parent podcast being Los Compadres Podcast. This will be taking …

Mailbag: Super Bowl long shots, active Hall of Fame coaches, picking who to root for, podcast behind the scenes & more

Big questions we want answered after the 2022 NFL Draft

Lessons we learned from teams in the 2022 NFL Draft

The biggest questions heading into the 2022 NFL Draft

An intro to the 2022 NFL Draft class with Dane Brugler

Mailbag Part 1: Where Joe Burrow ranks, rebuilding an offensive line, teams that are a QB away & more

Super Bowl LVI recap: How the Rams won it all & what's next for Joe Burrow & the Bengals

Calvin Johnson on why Matthew Stafford is different, 10 players who define Super Bowl LVI & the staying power of Andrew Whitworth with Clint Boling

How the Rams & Bengals have evolved with Ollie Connolly, Seth Galina & Diante Lee

Bengals & Rams move on to Super Bowl LVI & can the 49ers & Chiefs make another run?

Mailbag: OT rule change, Mitchell Schwartz on Chiefs final drive, getting over losses, how to feel if your team lacks a QB & more

2022 NFL Draft: Brugler & Zierlein on the talent at the top, QBs & their favorite prospects

Rams crush Cardinals, Matthew Stafford gets a playoff W & what's next for Arizona

The MVP case for Cooper Kupp & Jonathan Taylor, should the Vikings want the playoffs & the Browns' Baker Mayfield conundrum with Zac Jackson

Mailbag: The most star heavy teams, Jaguars coaching swings, the myth of "too tall" QBs, how Bengals fans should feel & more

Kurt Warner on Mac Jones, cerebral QBs & the state of quarterback play in 2021

NFL teams out of the playoff race, can the Dolphins remain hot & questions for the Bills with Lindsay Jones + a Philadelphia Eagles team visit with Bo Wulf

Examining the parity of the 2021 NFL season with Mike Sando

Mailbag: How players spend the bye week, what positions are most valuable, is Matt LaFleur underrated & more with Mitchell Schwartz

What we’re thankful for this NFL season

Mailbag: The Baker Mayfield dilemma, QBs in bad situations, when to move on from a coach & more with Mitchell Schwartz

Ranking the best teams after week 8, Mike White shocks the Bengals, the Saints top the Bucs & more with Nate Tice

Lamar Jackson’s dominance, a test for the Cardinals’ defense and where does the WFT go from here with Nate Tice + Sheil Kapadia’s Week 6 picks

What’s next for the Raiders, Kyler Murray vs. Baker Mayfield and questions for the Seahawks’ offense with Lindsay Jones + a Kansas City Chiefs team visit with Nate Taylor

Lamar Jackson flips past the Chiefs, the Cowboys edge the Chargers, Kyler Murray carries the Cardinals & more with Nate Tice

The Chiefs outlast the Browns, Justin Herbert shows out, the Saints shock the Packers & more with Nate Tice

Players with most at stake in 2021, Carson Wentz’s injury and Dolphins & Bills team visits

Canton Court: Making a case for the Hall of Fame

1st Annual Hall of Very Good Induction - which non-HOF players are worth remembering?

Chargers’ hype, Sam Darnold’s fit in Carolina, the Colts’ roster approach and more: Answering all of your NFL questions

Draft Night Special: Trey Lance to the 49ers, Justin Fields to the Bears & more shocking moves from round 1

Examining the best and worst drafting teams with Bill Barnwell

Breaking: 49ers trade up to pick 3, then the Dolphins secure pick 6 from the Eagles

Beginner’s guide to the 2021 NFL Draft with Dane Brugler

Confused by JuJu, Daniel Jones has no excuse, the Broncos might be back, Raiders risks & more free agency lessons with Nate Tice

J.J. Watt to the Cardinals & previewing the top free agents with Sheil Kapadia

The biggest question facing each AFC team this offseason

The biggest question facing each NFC team this offseason

When we'll be back & a preview of The Artist & The Athlete

How the Buccaneers & Chiefs were built with Greg Auman & Nate Taylor

Chiefs & Bucs advance to Super Bowl LV; what's next for Aaron Rodgers, the Bills & more in our Conference Championship recap

Conference Championship best bets and picks against the spread

Divisional Round best bets and picks against the spread

Bears sticking with Ryan Pace and Matt Nagy, Seahawks part ways with Brian Schottenheimer and a divisional round preview

The playoffs are set, the Browns end the drought, Washington stumbles in, Titans, Rams, Cardinals concerns & more in our week 17 reaction

Gifts for NFL teams, games with playoff implications, Rivers vs. Roethlisberger, Coach of the Year, MVP & more in our week 16 preview

The Jets lose by winning, Mahomes vs. Brees, Wild Card threat index, debating the Bills and Packers, the Bears find a groove & more in our week 15 reaction

Week 15 DFS plays, and picks against the spread

Questions for the Saints, Washington’s defense vs. Russell Wilson and football in the UK with Mark Chapman in our week 15 preview

Week 14 DFS plays, and picks against the spread

AFC playoff race heats up, what's at stake for Doug Pederson and examining the Bills' offense with Ted Nguyen in our week 14 preview

Week 13 DFS plays, and picks against the spread

Roger Goodell’s comments on NFL’s COVID-19 protocols, Baker Mayfield’s big test vs. Titans and plenty at stake for Bears and Lions in our week 13 preview

Week 12 DFS plays, and picks against the spread

Mahomes vs. Brady, AFC South up for grabs and what to be thankful for this NFL season in our week 12 preview

Week 11 DFS plays, and picks against the spread

Week 10 DFS plays, and picks against the spread

Kyler vs. Tua, the Saints maul the Buccaneers, Patrick Mahomes is a cheat code, choosing between the Falcons & Texans & more in our week 9 reaction

Week 9 DFS plays, and picks against the spread

Brady vs. Brees, a test for the Dolphins’ defense and the league deals with COVID-19 in our week 9 preview

Week 8 DFS plays, and picks against the spread

Week 7 DFS plays, and picks against the spread

Week 6 DFS plays and picks against the spread

Week 5 DFS plays and picks against the spread

Week 4 DFS plays and picks against the spread

Week 3 DFS plays and picks against the spread