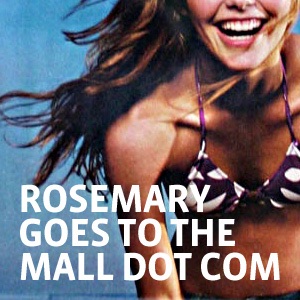 Rosemary Goes to the Mall

Rosemary Goes to the Mall

Welcome To Rosemary Goes To The Mall Dot Com! In the Spring of 2006, Rosemary had the brilliant idea of creating a giant sculpture made out of shopping bags from the Mall of America. Congratulating herself on her genius, she went to the Mall and started asking stores for bags, but they wouldn’t give them to her without buying something. Thus began one of the most misguided adventures of her young life, as she slowly worked her way around the Mall, making purchases at every retail store but two (she lied to get the Eddie Bauer bag, and got weirded out at Daniel’s Leather). In the end, she made purchases at over 300 stores, returning (most of) those purchases bag-less on the following visit. Among her favorite items were the $100 Stella McCartney yoga mat, the gold lamé Puma gym bag, a super cute pair of Mia sandals from Macy’s, and a $300 pair of Prada sunglasses – inspiring her alter ego, “the lady with the Prada sunglasses” to take over for a couple subsequent shopping trips. Other adventures included getting high at the oxygen bar and buying a $500 GPS system for her car at Radio Shack. She kept only the things she really needed, or were too cute to pass up, and she got stuck with a lot of dumb stuff from stores that didn’t accept returns. In all, Rosemary spent $15,339.46 at the Mall, and she can’t quite bring herself to publicly state the dollar amount of the purchases she kept. Her husband stopped looking at the credit card bill about 5 shopping trips in, citing “increased anxiety and a tightness in his chest.” Rosemary, having grappled with the shopping-related demons of boredom, guilt, anger, and exhilaration, is just really glad it’s over.

Are you awake yet to your fullest poential? Let me change your perspective in life and open your eyes to new way of healing and finding inner balance so you are no longer blo…