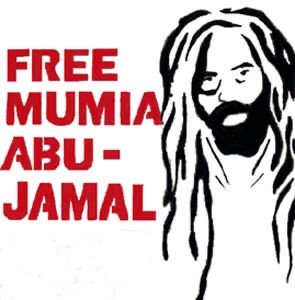 Mumia Abu-Jamal is an award-winning journalist who chronicles the human condition. He has been a resident of Pennsylvania's death row for twenty-five years. Writing from his solitary confinement cell his essays have reached a worldwide audience. His books "Live From Death Row", "Death Blossoms", "All Things Censored", "Faith of Our Fathers" and "We Want Freedom" have sold over 150,000 copies and been translated into nine languages. His 1982-murder trial and subsequent conviction have been the subject of great debate. Major issues in the trial have led to a worldwide campaign to gain Mumia a new trial and, ultimately, to gain his freedom.

When A Child Dies

Badge of the Rapist Racist

The Wages of Fear

None of Your Business

A Tale of Two Men

To Serve & Protect or Ravish & Wreck

Mumia's Message to the Movement

Mumia's Condition & his Reaction to DOC lies and Stonewalling

The Movement For Justice Against Police Violence

Politicians Servants of the Wealthy

From Katrina to Ferguson

Murderers of the World Arrive in the Americas" (Murder Inc.)

Trump: And the Politics of Resentment

Democracy, Dictatorships & Empire (from Writing on the Wall)

40 Years in the Wilderness(from Writing on the Wall)

Silence of the Lambs (from Writing on the Wall)

Gangsters in Blue (from Writing on the Wall)

What to a Prisoner is the 4th of July?

Dynasty: The Politics of Spectacle

Message to the Movement

Bullies Abroad and Bullies At Home

A World A Mess

A Serious Time (A PSA for the Prison Radio Defense Fund )

With the Passing of Flags and Banners

Torture by Another Name

Why We Can't Breathe

Death for a Cigarette

Slaves of the State

What has Prisoner Solidarity Meant?

The Glory of Youth

The Not So Grand Jury

Who Wins and Who Loses

What is Palestine to the U.S.?

A Nation in Fear

Mumia's response to PA Legislature Trying to Silence Him

A Tale of Two Oppressed Communities

Ferguson: The Failure of Black Politics

The Isis Crisis: A U.S. Creation

The Transmogrification of Barack Hussain Obama

The Lure of War

War by Another Name

The Meaning of Ferguson

Salute to the Fergusons

The Real Outside Agitators

Night of Pain Night of Rage

Fear of the World Outside

When Children Are the Enemy

The Perils of Empire

Military Advisors? The Way Back into Iraq

Wild In the Streets

Pain and Rage in Chiapas

The War Within (Nigeria)

Celebration and Resistance: A Message to Events during the week of April 24th 2014

On Reconstruction Lecture by Mumia Abu-Jamal

Martin, Women, and the Movement

The Dallas Five: Fighting for Their Lives

For The Love of Winnie

The Wages of Life

Detroit: Night of the Wolves

Health For the People

Other Brothers in Angola

The Meaning of Malcolm

Music of the Soul

Jessica Huntley: A Woman of the Word

Shutdown Method to the Madness

Boots and Brutes on the Ground

Cat Back in Court

The Compassion of Empire: Herman and Lynne Await

Fire on the Nile

In The Name of Al Qaeda

The Re-Education of Lauryn Hill

Beyond Trayvon: When the Personal Ain't Political

The Case of Edward Snowden

Egypt: Back To Square One

The Court Giveth and The Court Taketh

Cat Returns to The Cage

Freedom of Movement for Free People

The Lessons of Temple U

Good for the Goose

Martin in Memory and In Life

The Wages of Solitary

Frozen in Stone: Frozen in Time

A Death Sentence for Defending Her Client? Lynne Stewart.

Dismantling The Empire' by Chalmers Johnson: A Book Review

The Best And Worst Of Times

From Management To Mastery

The State and the Teacher: Alberto Patishtan

Tears of Sorrow and Rage

Interview with Corey and Eric of the Liberation Frequency Collective

Brothers Under The Skin

The Politics Of Style

Butter (Terry Williams) Gets to Breathe

From Hope to Fear

Dying For A Raise

Children of the Wind

The Hour of the Wolf

Massacre at the Temple

Of Presidents and Praetorians

The American Way... Of Massacres

A Question Of Torture

The State As Murderers

Trayvon and the War Against Us

May Day, Our Day

A conversation with Mumia Abu-Jamal and Noelle Hanrahan

The Creation Of A Race

A short PSA from Mumia about the upcoming Manning Marable Conference April 26, 2012

Message to the Movement

Children of the Hole

The Health Of Nations

The Politics Of Mean

For a Revolutionary Black History Month

Of Love and Struggle

Of Idiots and Sages (Read by Noam Chomsky)

Of Idiots and Sages (Read by Mumia Abu-Jamal)

Whom Do They Represent?

From State Pens To Penn State

The Managers Of Money

What Do They Want?

The Life of John Carlos... Who?

Palestine At The U.N.: Nationhood

A Grand Bargain... For Surrender

Mubarak In The Dock

When Media Is Master

The Media And The Medea Complex

Teachers: On The Frontlines Of Class War

Mad In The Middle East

The Spoils Of War

From Kent To Kal-El

The Lesson From The Osama Hit

The Fate Of Kings

The Method Of Their Madness

Manning's Malcolm... And Ours

The War That Never Ended

Did You Vote For This?

The Enemies We Don't Know

What The Arab Rebellions Mean

Bombing His Own People?

Cracks In The Empire

The Set Up Or The Sell Out

Jay-Z: The Roots Of Rap

Campaign To End The Death Penalty Interview With Mumia