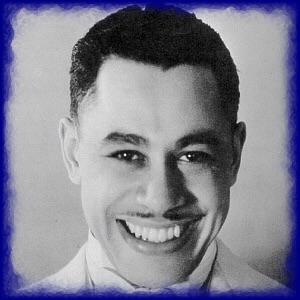 Cab Calloway -- the legendary Hi De Ho man -- was a energetic showman, gifted singer, and talented actor. A truly larger than life figure in American pop culture, immortalized in cartoons and caricatures, Calloway also led one of the greatest bands of the Swing Era. The middle-class Calloway family hoped their son would become a lawyer like his father. But young Cabell, born in Rochester, New York, on Christmas Day in 1907, and raised primarily in Baltimore, Maryland, wanted to be an entertainer. Cab did attend law school in Chicago, but the hours past sunset found him performing in local nighclubs.It was in such a club where he met trumpeter Louis Armstrong, who taught him to sing in the scat style. Eventually, Cab left law school to sing with a band called the Alabamians. In 1930, the Cotton Club emerged as a hip new club in Harlem known for its lavish stage shows and talented musicians like Duke Ellington. Cabs singing and showmanship captured the attention of the owner and his band was hired to replace the Ellingtons band. In 1931, Cab and his manager, Irvin Mills, put together a song that will forever be identified with Calloway -- Minnie The Moocher. The tune sold over one million copies and the group soon broke every existing record for all-black band audiences. The success of Minnie the Moocher and its steady gig at the Cotton Club had Cabs big band in constant demand. The group spent quite a bit of time on the road and when racism reared its ugly head Cab used proceeds from the Cotton Club and Minnie money to travel lavishly by chartered train. Cabs scat singing, dancing, comedic personality and flashy elegance had made him a star and a million-selling recording artist. He continued to perform right up until his death in 1994 at the age of 88.

A Chicken aint nothing but a Bird, circa 1935

Everbody eats when They come to My House, circa 1947

Minnie the Moocher, circa 1932

Two blocks down turn left, circa 1947