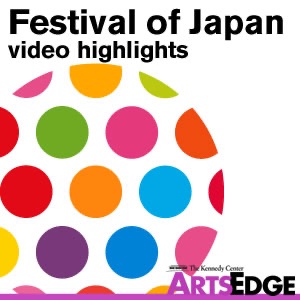 The Festival of Japan Video Highlights

JAPAN! culture + hyperculture was marked by a festive Otsukimi (Japanese moon-viewing) evening featuring a special Millennium Stage performance of “Trancework” and “Eternal Now” by shodo performing artist Koji Kakinuma, accompanied by the taiko group AUN. The event took place outside under the full moon on the Kennedy Center's South Plaza.

Koji Kakinuma is an artist. He began studying traditional Japanese monochrome brushwork at the age of five. Kakinuma’s rise through the Japanese art world has been meteoric, winning one prestigious competition after another, having his life and paintings featured in several televised documentaries, and being invited to demonstrate and show his work at the Metropolitan Museum of Art in New York. Kakinuma has constantly sought to break free from the strictures of his classical training and to express himself in innovative, experimental ways. His most recent work, The Warrior Ideal was selected as the title artwork for the 2007 season of Japan’s most popular long-running television show, The Taiga Drama Series.

ARTSEDGE, the Kennedy Center's arts education network, supports the creative use of technology to enhance teaching and learning in, through, and about the arts, offering free, standards-based teaching materials for use in and out of the classroom, media-rich interactive experiences, professional development resources, and guidelines for arts-based instruction and assessment. Visit ARTSEDGE at artsedge.kennedy-center.org.

The Weekend Show With Mediumjay

On our podcast hosted by 2 down to earth dudes from a small city called Winnipeg, Manitoba. We oftent intelligently debate about the dumbest things. We talk about the latest …