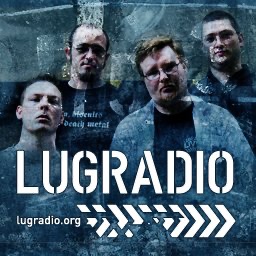 Jono Bacon, Stuart Langridge, Chris Procter, and Adam Sweet in the last ever LugRadio show, from LugRadio Live 2009. Featuring all the previous LugRadio presenters, a wall behind the presenters with abusive Twitter commentary, Jono in a raccoon suit, over a year's delay before the release of this episode, sterling work from Tony Whitmore in getting it all done, and:

Andy Stanford-Clark, who won the banner signed by all 7 presenters, has decided to auction it to generate more money for ORG, especially as there are people who weren't able to make LRL2009. Please take a look at his auction and give generously! See the eBay auction here!

Watch the official video! Available for download in Ogg Theora, WMV, and mp4 formats from archive.org, and you can watch the video directly at blip.tv!

The Play By Play Podcast